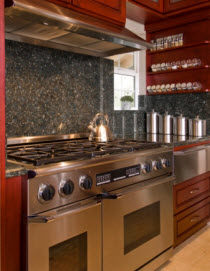 
The overall aesthetic in the majority of contemporary kitchens is geometric, pared-down, simple, elegant and clean.

Lighting can be used as a room divider.


The "hidden kitchen" concept walls off the clean-up and storage areas from the more public food prep and dining areas.

When it comes to finding the perfect home, Real Living Sales Professionals have noticed a strong common thread among homebuyers.  That is, the kitchen – its style, design, layout and orientation to the rest of the home– is still one of the most influential factors when it comes to the home receiving a thumbs up or thumbs down from the potential buyers.  And the Eurocucina kitchen exposition held recently in Milan reaffirmed the kitchen’s power as it showcased the latest in international contemporary style – demonstrating the ongoing evolution and continued vibrancy of this look and its role in the luxury home market.

There were enough mind-expanding ideas and provocative combinations of materials and looks to provide plenty of room for thought, especially for American luxury homebuyers who might be more accustomed to a traditional design vocabulary. It was a preview of design trends, some of which may make their way across the Atlantic.

The overall aesthetic in the majority of kitchens was geometric, pared-down, simple, elegant and clean. On display were inventive uses of lighting, unusual countertop materials, boldly scaled hoods and lamp shades, bold colors and lush wood-grain finishes - along with a move toward a "hidden kitchen" concept in which the clean-up and storage areas are walled off from the more public food prep and dining areas. Interested in creating this look in your current or next home? Read on and see how color, proportion and lighting can bring cutting-edge European design to your kitchen.

Dark and medium silvery gray wood grains, deeply wire brushed, dominated the Milan show. Although there were still some light oak finishes, they were less in evidence than at the previous show two years earlier. Dark rift-cut oaks looked stately paired with stainless steel or creamy solid surface or composite counters. So did the deeper brown walnuts.

Secondary to the dark grays were dark chocolate finishes. While oak and walnut predominated, there was a profusion of highly patterned and sometimes exotic wood grains such as mahogany, teak, olive, zebra and eucalyptus. Overall, wood grains were used predominantly on the horizontal rather than vertical.

Not everything in the palette was subdued, however. The darker woods were punched up with blasts of citrus oranges and limes. Red in many tones popped up as another frequent accent color, ranging from fire engine laminates, to cherry red paint, to oxblood stains on wood. Designers frequently used a "cube" approach to color combinations. For instance, they used a row of cabinet doors in the center of a tall elevation to introduce a new color.

If one piece were to symbolize the overall design vocabulary at Milan, it was the classic Parson's table - a form that was widely used to intersect with or relate to other pieces, often at different angles and heights. Sometimes the form jutted out as an open end to a run of cabinets, while other times a series of these rhyming shapes intersected to create an island.

In storage systems, there was a tendency to mix closed cabinets with elegant open shelving as part of a system. Cabinet doors emphasized the horizontal. Rather than typical wall cabinets, Italian and German designers often used long, horizontal flip-up doors like those in airplane luggage compartments - but much more elegant, often with glass doors framed in aluminum. In some cases, the horizontal motif gave way to a vertical one at the end of the room, where the kitchen would transition into the dining room.

Setting off the cabinets were quiet, elegant countertops of either solid surfacing, quartz composite, or even laminate. The quartz composite had a much finer particulate than commonly seen here. Stainless countertops were the workhorses of the kitchen, with integrated cooktops and sinks all as one piece. Glass countertops provided another note of elegance, raised on arched moldings that served as platforms.

Light as a design tool

The most dramatic design tool to catch visitors' eyes at the show was lighting, especially the more interesting applications of diffused lighting, such as a 42"-high illuminated frosted glass panel between a kitchen and the adjacent living area.

Lighting was used as a room divider. It was used on backsplashes, over, under and in the middle of shelving. It was used inside cabinets and tucked into a channel between counter and base cabinets. Back lighting provided drama for a wood-framed wall section with open shelving.

A hanging wall of nine square cabinets with translucent doors was made more dramatic with interior lighting. Another variation was an electric eye in a backsplash to control kitchen lighting. But not all lighting was built-in. The show also featured dramatic, large-scaled fabric light shades, often in pairs over islands.

A similar oversize, double-barreled approach was applied to hoods and other appliances. In a number of cases, two, side-by-side chimneys rose dramatically over cooktops. Twin wall ovens, or even a trio, were placed side-by-side rather than stacked. Sometimes they were wall-hung, or simply sat on a counter, almost like pieces of sculpture, rather than built into the cabinetry.

After years of breaking down kitchen walls, European designers are building them back up again, closing off a space that could be called the "hidden kitchen." Concealed behind what look like tall pantry doors or behind sliding doors, the hidden kitchen detaches the food prep and dining areas from the less sightly clean up and storage area.

The hidden kitchen, somewhat like a butler's pantry, contains storage, dishwasher and sink, and is designed for the messier parts of prepping and cleaning up. Final cooking and dining takes place in the more public, designed and formal parts of the kitchen space.

The Asian look seems to waning in kitchens, judging from the displays. However, it was still a major theme for accessories.

What does this all mean for American luxury homebuyers? All in all, the show illustrated that there continue to be cultural differences on both sides of the Atlantic. European design has a distinctly different look from most American design. But in today's world of globalization and worldwide communications networks, ideas travel with the speed of thought.

You can expect to see design influences represented at the show to start appearing in elements of American design, as well. Given all the considerations involved in new home construction, this may happen first in the design of high-end remodeling projects.