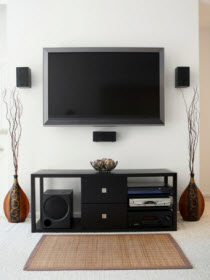 Luxury homes are regularly appointed with many amenities.

Make sure your realtor knows what features you’re looking for in a luxury home.


Wine cellars and even cigar rooms are popular amenities.

These days the best theater experience is more likely to be in a luxury home than in a multiplex.

The elaborate home theater has become the latest must-have element of the luxury home. What started as a modest expansion of the family entertainment center has evolved into a palatial fantasy space. According to theater designers and installers, luxury homeowners are beginning to care about technical performance and theater ambiance, with decisions all driven by their personal lifestyles and tastes.  Similarly, at Real Living, the company’s Sales Professionals who help buyers from coast to coast find their dream luxury homes, are reporting that buyers’ interest in a listed home’s theater is often as keen as their interest in the kitchen, landscaping and other key features.

A movie buff client might want a system that also accommodates pro-quality VHS in order to screen their collection of obscure old movies not available on DVD, whereas someone who's mainly interested in viewing new releases should go with a DVD-only system.

For many adults, video gaming has become another standard element of the home theater. Games require an additional lighting scenario, notes Terry Morton, owner, Land & Sea Entertainment in San Diego. "You're going to want the projection system to be bright enough, but you're also going to want to have light on your controllers so you can see what you're doing."

Another issue is whether or not you want the AV equipment visible. "Generally, the electronics are concealed," says James Theobald, marketing director, Theo Kalomirakis Theaters in New York. "It's nice to sit in a room that's designed so well you really don't pay attention to where the sound and picture are coming from."

"I don't like to have (equipment lights) blinking inside the theater," Andalia adds. He places the equipment in a vestibule, or the back of the theater, hidden behind stained glass doors or "something that looks like part of the architecture."

Not everyone agrees. Morton adds that 80 percent of his clientele want the components concealed, but the other 20 percent like to show them off, especially if they're paying for high-end equipment. "There's a certain amount of vanity in this for people, especially the person who's trying to build a better theater than their friend just built," he quips.

While AV contractors primarily will follow a client's wishes in terms of decor, they still have their own style. "We've done rooms with big velour curtains, but my preference is for a more contemporary look, where you have acoustic panels on the wall. I like the clean studio screening room look," Morton says.

Some homeowners choose fantasy themes. Mike Newman, vice president and systems engineer, CHT Systems in Dallas, cites themes such as a Roman coliseum, a Mediterranean villa, a cave, "even a little bit of Star Trek," he remembers. In his experience, the theme room often is different than the look of the rest of the house.

Let There Be Light

Good lighting is important in every part of the house, but particularly in the theater. "Lights create dimensionality for the room," Theobald says. "Typically, we'll have ambient lighting that creates an architectural scene, such as column or panel washers that emphasize certain elements of the room."

Morton favors multiple layers of lighting. "The more layers, the more dramatic the lighting control can be." He programs eight to 10 scenes that a client can pick from using a touch panel, from full bright lights to a scene for viewing movies, for reading, video games, and the like. He frequently uses soffit and step lighting on the risers to achieve the effects he wants.

Many homeowners who are installing a home theater already have a whole-house control system for lighting and other functions, and the theater control system can be added to the mix. Theobald likes the Crestron system, "which makes the theater as easy to operate as an ATM. You press one button and the curtains will open, the lights will dim, and the projector will come on. You can also access all your media through the same touch panel."

Control is, after all, what the home theater experience is all about. "People like to be in charge of their own environment," Morton concludes. "And we like to help them control it."