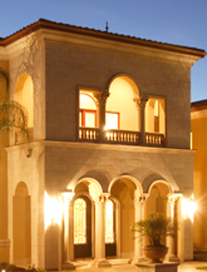 
When it comes to home media, do-it-yourself is strictly for small projects.

Word-of-mouth is a powerful factor in selecting media systems, but what works for a friend may not be the best system for you.


Your AV contractor should sit down with the architect or designer as early as possible.

Luxury homeowners can create the ultimate home media environment by working with a specialist. This overview will help start the conversation.

Today's luxury home is decked out  with media as never before. Media-savvy owners of luxury homes want to have and enjoy it all: Theater-quality movies in their own private theaters; big-screen TVs; high-definition sports, and professional quality audio inside – and increasingly, outside –the house.  Indeed, from coast to coast, Real Living’s network of sales professionals who work with luxury home buyers and sellers say their customers are increasingly inquiring about homes’ high-tech media offerings, and are asking for references for respected providers of the latest equipment and systems.

Due to their complexity, systems like this require careful planning to integrate into the home. When it comes to home media, do-it-yourself is strictly for small projects. Homeowners are encouraged to work with specialists to gain knowledge and insight to their specific media needs.

Television and computer technology have basically merged in today's high-end systems, becoming digital and far more complicated. Homeowners should consult with an expert about their home media needs, but in order to talk with a specialist, it helps to know some of the language and a few basic concepts. Here are some key terms that might be useful.

Aspect ratio: The ratio of the width to the height of a direct-view picture or projected image. The standard aspect ratio for HDTV is currently 16:9 (rectangular, wide screen image). The current square-format NTSC standard for analog television broadcasts is 4:3.

DLP projection: DLP projection delivers large screen images that are superior in many respects to film. A DLP projection system can translate a digital video image into a projected image with maximum fidelity. DLP is known for great picture quality and good contrast, but is best viewed in a darkened room.

Front projection TV: Front projection is a method of viewing that utilizes a video projector (usually mounted on the ceiling). The image is projected onto a separate unit, typically a retractable movie screen. The front projection method allows for projection onto screen sizes that exceed 300 inches.

Gain: A measure of the amount of light a screen reflects. Brighter rooms need higher gain screens to make the image more visible.

High Definition DVD: Two competing formats are hitting the market this year, Blu-ray and HD-DVD. These offer the sharper images than standard DVDs and most HDTV signals. They will require special equipment to play and project, for a true theater-style picture.

High Definition Television (HDTV): HDTV is a new television standard that uses digital signals rather than the current analog broadcast standard. HDTV signals contain over 700 horizontal lines of resolution, compared to the 525 lines of resolution that analog provides. HDTV is also geared toward a rectangular wide screen format (16:9) for a true theater-like experience.

LCD projection: LCD or Liquid Crystal Display is widely used in portable computers, digital watches and, more recently, in home entertainment products. LCD projection produces a sharp, crisp and very bright image, but one with less contrast than DLP. LCD is best for rooms that are not entirely dark.

Resolution: The resolution of an image is the total number of stacked horizontal lines that make up a picture. A higher resolution results in a sharper, more detailed picture. Standard television signals generally display 480 lines of resolution. HDTV signals, however, consist of over 700 lines of resolution, resulting in superior image quality.

Viewing angle: The maximum angle at which an image can be viewed from an off-center point.

Working with a consultant will help you sort out what's most important to you. How important are sports? Other broadcast television? Home video? Movies? Music? The sports fan in you may want a plasma set in a media room, while the film buff craves a true home theater with a DLP projection system. Maybe you want both - it all depends on the space you have available and what you want to do in that space. Here are some things to keep in mind as you get started.

The technology is continuing to evolve, and so is the home. Besides home theaters and media rooms, the great room has become another home media focal point in contemporary luxury homes - with luxury sound systems and big-screen plasma sets the most popular options.

Plasma screens are often housed in custom cabinetry adjacent to the fireplace. In other cases the plasma screen may take the place of honor above the fireplace, where prized artwork might have hung previously.